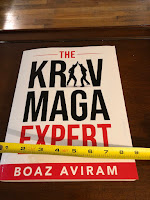 Understanding the tactics is crucial for timing of techniques!  Otherwise you end up throwing kicks, punches and grappling attempts in the wrong range, which make them irrelevant and non efficient!


Understanding the tactics should be the basis for the training drills!  For example, if the sequence of Kicks and Strikes and Grappling does not correlate to the opening and closing the gap between the opponents, it can only cause more confusion and that could create a critical problems during a fight!

Pure Krav Maga tactics are based on maximizing reach to human pressure points from any distance and angle possible while prioritizing the use of those that create least options for the opponent to counter or be able to execute a follow up attacks. Its about 360 degree reach of linear approach in the long range and circular approach in the shorter range and blocking and countering it all.

Awareness to the environment and body’s abilities through learning and training, ability to reach and manipulate pressure points 360 degrees and ability to prevent others from reaching your own pressure points before you reach theirs, under the constraints of the human reaction time is the core of the training system of Pure Krav Maga.

GET THE KRAV MAGA EXPERT BOOK!