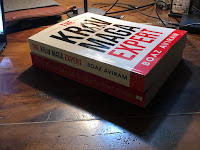 Krav Maga is the Israeli Defense Forces Original Intensive Training System of Hand to Hand Combat.  Like any training system, it has peak periods and decline due to assimilation by others that posses different mentality.

Peaked in the 1980’s in the IDF Fighting Fitness Academy this training system was delivered to trainee soldiers and officers over a 3 week period allowing to regurgitate the complete training cycles three times helping to memorize the process with hope to deliver the ability to deliver the complete system to others.

From a young athlete that mastered Jujitsu, Boxing, Wrestling, Gymnastics and Swimming acquiring reality based combat during Nazi Europe Streets arriving in British Palestine to join the efforts of creating the state of Israel, Immi Sde Or Lichtenfeld was the official creator of this training system.

That training system with distilled ball park of 200 techniques and 15 combat training drills which were the essence of programming humans in timely recognition of imminent danger, reaching opponent’s pressure points and manipulating them with necessary and deadly force before the possibility of harm and death to oneself is the essence of Krav Maga.

Unfortunately the name Krav Maga used by many other martial arts enthusiasts and charlatans does not reflect the system of Krav Maga!

Thank you for your wonderful article it helps me a lot.