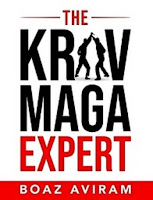 There is this notion of leave it to the experts, promoting virtues of legendary combat excellence of just Alpha Males and near death legendary experience… However, applying the Pure Krav Maga Simple Theory of Relativity turns many experts’ legends into fairy tales.

The human reaction time is a major component in the training theory. Further broken down and put together it turns out that moving the arms alone in unidirectional motions from the position they were placed prior to the recognition of need of immediate action minimizes waste of precious time and maximizes economy of motion. Therefore it promotes maximum speed of reach and prevention of reach.

The whole theory of Martial Arts proper stance lies in comfort of ability to timely attack and block. However in Pure Krav Maga instead the essence of outlet stances is to demonstrate the relativity of reach from each possible relative position allowing natural selection when combat scenarios arise.

So when kicking in the kicking range is the most efficient tool to reach the human pressure points, all the other limbs aside the kicking foot help to prep and support that most efficient method of kicking. However, the head and shoulders must start first prompting gravity to pull the body forward followed with the arms for balance and hips twist to align the landing of the base foot’s heel on the same line of the kicking leg’s heel. That would ensure that all the body weight would be propelled in the same direction causing maximum momentum development.

Then in the Punching range, all the other limbs help support the punch. However, with straight punching, the body lunges first, then the arms must start first in reach motion and the rest of the body naturally follows in shifting all the weight by gravity into the impact. With circular punching like hook, uppercuts and knife hand strikes, which are secondary strikes after distraction caused with the primary strikes, prepositioning of the arms are required to maximize the closer range impact.
When blocking either kicks or punches, the arms must start first and the body will follow in natural motion.  Escpecially in efficient knife poking scenarios, its imperative that only the arms start to move with blocking as any foot motion would slow down the block and let the tip of the blade poke your body.

Then prioritizing Impact over pure leverage pressure point manipulation when possible would determine which one of the opponents is using the fastest finishing method without giving the other the option to exit, recuperate and counter with greater deadly approach!

While evident in combat sports, great athletes use these winning strategies, some consistently and some not, their track records of victories and losses would follow accordingly. They can afford trying as there are rules and referees… However, for the one that seeks self defense and hand to hand combat under survival rules, the only way to learn from mistakes safely is in programmed training, as the lethal elements of combat are webbed all along the training and full use would cause irreversible damage.

The steps are excellent and very help for me. Thank for sharing article.