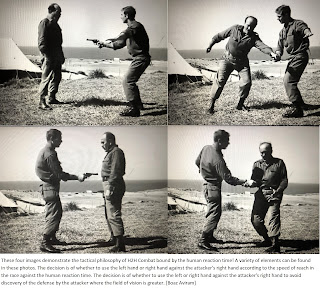 These four images demonstrate the tactical philosophy of H2H Combat bound by the human reaction time! A variety of elements can be found in these photos, like whether to use the left hand or right hand against the attacker's right hand according to the speed of reach in the race against the human reaction time. Your mind should reflect on the decision of whether to use the left or right hand against the attacker's right hand to avoid discovery of the defense by the attacker where the field of vision is greater as well.
The thing is when photos are sparse and you try to show things by few photos you tend to combine things... You often preclude various developing scenarios... In this "scenario" the attacker training partner stopped resisting so the defender went ahead to the next step of fluid possibilities...
If you watch the video below you will see the covering of all the options and why this method is preferable. You have your whole body weight on that arm and you are limiting the elbow movement of the attacker, and it would be hard for him to lift his hand when you have your whole body weight on it...If he tries to lift his arm he cannot. If he tries to move back to take you out of balance he cannot because you either side stepped forward keeping the weight on his arm or punched him in the face or both...It’s actually a strike forward motion...
I think the priority in decision is how much element of surprise time you have to divert the barrel away from your body and with which part of the boy you can reach to do it and to which direction... It’s a matter of splits of a second. Someone calculated exactly how many splits of a second, but the best thing for an instructor and students it to take a device such as a BB gun and in some cases Simunition gun and train the attacker role to be fast and attentive in his vision and reaction and they try out and see if it works.
I've tried them all that way, and realized that any gun point to the head where your arms are to the side of the body, you don’t have the time to lift them to divert the barrel all the way up. So you rather move your head away and then block the attacker's wrist from returning to point the weapon at you.
Second if someone it pointing a gun to your back from behind, you is not quick enough to move the barrel away with your arm because by doing so you have to move your body and the attacker can sense it. So you need to do a full turn with your torso facing him. You don't deflect with your arm because it offsets the centrifugal force of the turn.
You turn first and then catch the arm. To make the turn quick you imagine you are about to face your opponent by spinning both of your shoulders and let both of your feet being pulled off the ground. It’s not a simple turn. Somewhat like a boxing side step but if you need to teach it quickly I find that this is the way to explain it. When I say you don’t I don’t mean a specific person but rather the average person.
We used to deliberate all these same thoughts of which quadrant the barrel is pointed to until we tested it. When you make a movement with just your hand under the barrel it takes time to recognize it, when you move your whole body you can easily see it. So in that split second the milliseconds you have the time to deflect the barrel and then move on to control it and neutralize the attacker.
To make things clear you are not competing with the speed of the bullet, but the speed of the brain's hand eye coordination. Assuming your attacker has the same brain hand eye coordination speed as you do approximately, you need to start first without projection to beat it. He is waiting for you to do something out of fear, and you want to use that split second ahead to start and finish diverting the barrel away from your body before he starts his hand eye coordination process.
Pistol Threat Defense Video Lesson
YouTube complete course on videoTraining ManualComplete Critical Mental Training