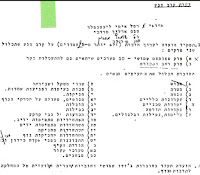 This document surfaced on the internet supposed to be a true or fabricated document from more than 40 years ago about an IDF Krav Maga Committee that was formed headed with Immi Lichtenfeld to create a krav maga curriculum brochure with no more than originaly 2 pages modified to 25 pages and two chaperts: A: Compressed Chapter that will be suitable also for Morning Fitness Exercises; B. Expanded and Detailed Chapter!

The Committee will use reference material Practical Judo Brochures and other Hebrew and Non Hebrew Language Physical Fitness Brochures available for that purpouse.

Its hard to auhenticate this document as it has fonts of modern typewriter and does not look that old (Immi's book and Eli Avikzar's IDF book had older type fonts).

It is clear that that document neglects to address blocks vs. unarmed combat against punches and kicks or any methods of countering that!
In the 1980, Krav Maga in the IDF had a Curriculum that included blocks vs. Punches and Kicks.

Another Odd Item that it is missing is the Use of a Club and defenses vs. a Club. While the underground was notorious for teaching everyone stick fighting and the Israeli and previous British Police were using Clubs, Military did not use them. So perhaps that was the original thought to omit them. But military Police did use them! So there was no reason not to include them!

Finally this could be a fabricated document for some marketing purpouse or a real one but in its preliminary stages.  Whether authentic or not, if could give you an idea of the Krav Maga One Man Show in the IDF Combat Fitness Academy and the add hoc committees that perhaps were formed to establish a proper curriculae.

In the 1980's there were 200 techniques taugt in 21 hours allowing sufficient time to drill each techniques in average 5 -10 steps correcting errors as you go and drilling them with 15 specialized combat drills mimicking reality.  It included unarmed combat attacks, blocks, grappling attacks and counter to soft pressure points, combat motion which included principles of reaction time preferences of which part of the body to keep in front, how to rollover and breakfall, use of a knife and deflection of knife attacks, use of a club and deflections of club attack, use of a rifle as a side arm with a bayonet and how to counter attack with a bayoneted rifle or bare arms.

Not all recuirts got any or all training as it was reerved to those that needed it in segments or in whole.

Over the years, it was proven that that type of intensive 21 hour curriculum taught in a supervised structured training outbenefited any other form of martial arts for the purpose of true Hand to Hand Combat training.

Then in the 1990's the Original IDF Krav Maga was gone!  A lineage break forced the IDF to seek existing Civilian Forms of Krav Maga, and since the Combat Fitness Academy was fitness geared, they could not tell the difference!

GET THE KRAV MAGA EXPERT BOOK!