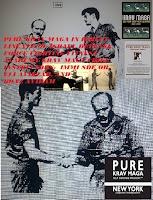 The original Israel Defense Forces Krav Maga was teaching only 3 techniques of pistol defense. Front center body from a distance front when barrel is pressed to the body, and from the rear center body. It later added from side center body. Later, other instructors added varieties of heights and angles and tried to use the same original techniques or other techniques!  To succeed against a realistic scenario you needed to train with realistic intent and training device to mimic the ultimate capabilities possible!  Only techniques that constantly work against the limits of challenging training partners are worthy of having in a curriculum of hand to hand combat!

The crucial success of any Krav Maga techniques was dependent of the human reaction time – the time it takes the brain to deliver the command to the trigger finger through the cervical spine and arm nerves from the inception of the decision to shoot. Such decision in a pistol threat scenario would be triggered by fear for fight to control the weapon!

The old revolvers and even semi auto pistols shooting techniques for combat trained individuals could be aiming from a distance holding the pistol with a straight arm while shoulders aligned at eye level or shooting from the hip as you draw! Of course other angles of shooting from a close distance could be aimed to the body or head from various angles. Center body or heart or head to kill and limbs to injure!

The idea in military combat is to shoot first immediately when you see your opponent! If he pops out from a cover by surprise, then you try to shoot first assuming both of you are trying to aim to the center and then shoot! So the fact that he is moving as he pops out from coverage tells you that he would need another split of a second to aim his pistol since the arms motion is required to balance movement!

So now let’s think about the tactical point of view. You don’t learn techniques and hope to get to the exact comfortable and feasible position and scenario to execute them. You learn to minimize your risk and prevent scenarios that make it feasible for you to get injured or die!

In modern tactical pistol shooting, you learn to chase your target and use a power grip to combat your high pulse body movement and aim at eye level to ensure you don’t hit the wrong man and you don’t waste time and hit your target!

You also learn that in the range of less than 10 feet you can hit the target with point shooting using just your hand and arm. The increase of the distance above 10 feet necessitates aiming at eye level. Some people with a lot of training can hit from the hip in greater distances.

So pointing a gun to a person execution style in close distance is either a threatening statement, or a comfortable method of killing a stationary target – one that is unlikely to resist!

You must always use your judgment when it comes to reality, but the idea is not to waste time when a threat exists and move to neutralize it preemptively when first encountered! So forget about Hollywood drama and the stupid mentality of exaggerated consequences of the use of lethal force! You are about to get killed – not your opponent! As you see him approaching you when you can reach the barrel you need to start moving and never stop and fake a clown begging for its life!

Thank you for your wonderful article it helps me a lot.